Ten years ago, we were in the middle of the Financial Crisis. Between October 2007 and March 2009, the S & P 500 lost 50% of its value. Home values plummeted. Banks and mortgage companies went from boom to bust seemingly overnight, and our entire financial system seemed to hang in the balance.

I’ve often joked since the recovery that those 18 months took at least three years off my life. As an advisor during those times, it was easy to feel like a broken record, trying to maintain faith in the markets and the plans we’d built for clients while it seemed the entire world as we knew it was being torn down.

We’ve never really escaped the specter of the financial crisis. With good reason, we often end up discussing with clients how particular portfolios behaved during that timeframe as a “stress test” for what we hope would be a worst-case scenario for our financial plans.

Looking back on the crisis, here are the key takeaways that have stayed with me through the ten years that have passed:

First, while the precipitous drop in the markets was gut wrenching, there were only two types of investors who got hurt: There were those who bailed out near the bottom, unable to stomach the volatility any longer, after enduring the brunt of the losses. They then missed the recovery, unable to believe that the crisis was over. These investors would have been better-served by a more conservative portfolio in the first place.

The second type of investor that got hurt during the crises were those who emotionally could handle the market troubles, but who needed to take distributions from their portfolio during all the volatility. Imagine you owned a stock mutual fund in November 2007 that was worth $100 per share. If you needed $1,000 from your portfolio every month, you were selling 10 shares at the start of the bear market every month to create your distribution. By February of 2009, you would need to sell 20 shares every month to create that same $1000. So, when the market finally turned around in March of 2009, there would be too few shares left for the portfolio to recover. A portfolio with income needs must always have a conservative component to weather such storms.

The second take away builds on the first. Investors want to be aggressive when the market is strong and conservative when the market is ugly. In retrospect, the crisis’ arrival seems obvious. The human brain is programmed to make sense out of events and look for causes, and this leads us to erroneously think events like the crisis can be reliably forecasted. And nothing illustrates this phenomenon better than the beginning of the market recovery in March 2009. Nobody sounded an all-clear whistle. The headlines were still as ugly in March as they had been in January. Yet money began flowing back into stocks and, with few interruptions, has continued to flow in ever since.

The third takeaway is that the recovery happened. Our financial system was pushed to the brink, and our faith in our system was pushed even further, but the markets bounced back. It’s been said that if people keep having babies and equipment keeps wearing out and needing replacement, the economy will grow and the markets with them. That’s a bit tongue – in – cheek, but, at the end of the day we must keep in mind that if we face a crisis that carries us to the point that these tenets are no longer true, it wouldn’t matter what we did with our clients’ money during such a crisis, as currency, even precious metals, would not have much value.

I like to think I’ll never have to deal with another crisis of that magnitude again during my career, but I always need to keep in mind the possibility. As Mark Twain said, “History doesn’t repeat, but it often rhymes.” To me that means that whatever causes the next crisis will be different from what caused the last, so we won’t see it coming. So, we build client portfolios based on how much risk they can tolerate, and how much money they need to spend in the short run. We don’t try to predict corrections, bear markets, or bull markets. And we keep the faith that, regardless of what the markets throw at us, recoveries happen. 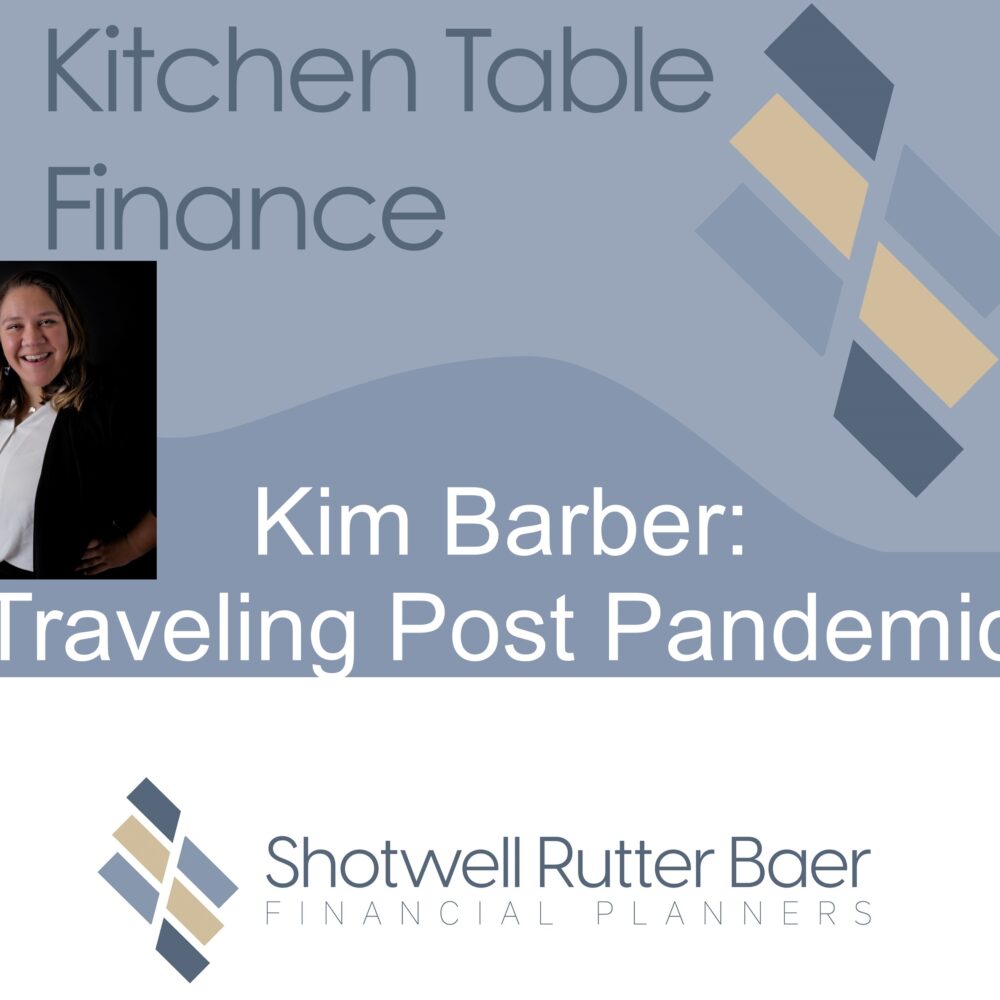 Join Dave and Nick as they chat with Kim Barber, owner of Globetrotter Travel, about traveling during a Pandemic. What does travel look like…
Read More

“Shotwell Rutter Baer Inc is an Investment Advisor registered with the Securities and Exchange Commission. Our current disclosure brochure, Form ADV Part 2, is available for your review upon request. This disclosure brochure, or a summary of material changes made, is also provided to our clients on an annual basis.”